The Office of the Prime Minister of Trinidad and Tobago, Gender and Child Affairs Division In collaboration with the Network of Rural Women Producers Trinidad and Tobago (NRWPTT) hosted a CSW62 side event during the 62nd session of the Commission on the Status of Women, entitled: Get Up, Speak Up, Stand Up; The Time is Now; Stand up for Gender Justice.

This side-event provided an opportunity for discussions with the state and civil society around critical issues related to gender justice as a key enabler for the achievement of the 2030 Agenda for Sustainable Development and a key foundation for building and sustaining peace. The speakers and those in attendance provided examples of how gender justice for women is central to the achievement of the development goals across multiple dimensions, whether through combating discriminatory laws, building capacity of institutions that deliver justice, strengthening women’s ability to know and claim their rights, enhancing women’s participation in the justice sector and promoting role models, among others.

Opening remarks was done by The Permanent Representative of Trinidad and Tobago to the United Nations, Her Excellency Mrs. Pennelope Beckles. Her Excellency actively participated in the exchange by sharing what gender justice means within the legal framework as an Attorney at Law and within the political realm based on her past ministerial and parliamentarian experiences.

The Honourable Ayanna Webster-Roy, Minister of State in the Office of the Prime Minister, holding the portfolios of Gender and Child Affairs, Ecclesiastical Affairs and Central Administration.

Dr. Hazel Brown, Women’s Rights Activist and former coordinator of the Network of NGOs of Trinidad and Tobago for the Advancement of Women.

The interactive discussion resulted in members of the audience contributing to the dialogue and advancing what gender justice means for them as individuals.

The discussions concluded with a renewed commitment aimed at ending poverty among women and putting gender equality at the core of poverty eradication; getting communities out of poverty will depend on women’s leadership, access to education, time, land, health care and credit, as well as women enjoying their reproductive and sexual rights, freedom from violence, and equal rights in the family and in society. 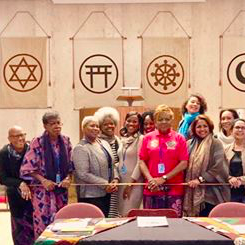