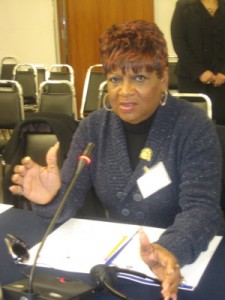 Gia Gaspard Taylor is a national of Trinidad and Tobago, who continues to devote herself tirelessly to national service particularly working with young people, women and the disadvantaged.

She holds a BSc in Social Work from

the School of Continuing Studies University of the West Indies; and has had many years of experience in working in both the public and private sector in Trinidad and Tobago, regionally, as well as within the diplomatic corps.

Gia’s wealth of experience in the areas of education, entrepreneurship, the advancement of women, opportunities for youth development and climate change, bring to bear fruitfully on the numerous committees and associations on which she serves.
Unique about her is the fact that she was born in the rural community of Penal, and grew up in the rural community of Sangre Grande, move into the capital city of Port of Spain married the City Mayor, to become city first lady (or Mayoress) during the years walk among Kings and Queens, Prince and Princesses, Presidents, Governors, Prime Ministers and more but never lost the common touch.