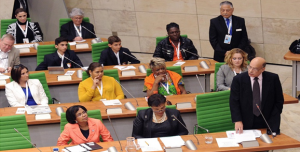 First impressions sets the tone for one receptiveness towards another and that was exactly what she did. The first time we saw her as she visited the Network of Rural Women Producers, Trinidad and Tobago Display, we felt the warmth of the Caribbean, and her eyes sparkled as she smiled brightly with colleagues, friends and strangers alike. Later that night at the CHOGM Women’s Forum Banquet hosted by Her Excellency Marie Louise Coleiro Preca, President of Malta, she sat at our table there on formal introduction we were inform that she was Baroness Scotland, a candidate for the Commonwealth Secretary General. After days of observing her, on the 25th November, 2015 we got the opportunity to sit directly behind her in the Parliament of Malta to be a part of the dialogue between the Commonwealth Secretary General  candidates and representatives of civil society.

All candidates; Mmasekgoa Masire-Mwamba, Sir Ronald Sanders and Baroness Patricia Scotland were quite impressive but Baroness Scotland was a force to be reckoned with. I listen attentively and hung on to each word they said, discussing issues such as LGBT Rights, environmental sustainability, opportunities and protection of women, and the future of indigenous people.

Baroness Scotland was quite knowledgeable about each issue and addressed concerns with facts and personal proposal for moving forward. Some issues hit home for her as she used herself and circumstances to bring light to issues. She highlighted her Carib origins and drew reference to socialization of indigenous people in society. She also highlighted the effects of hurricanes one of which recently hit her island Dominica and its impact on environmental sustainability and when asked about moving forward with LGBT rights she acknowledged that the commonwealth cannot force its member countries to change their laws but that she would work to bring about awareness and education to the issue.

She spoke intelligently and eloquently but simple enough for the common man to understand, by the end of the dialogue I was convinced beyond any doubts that she was the most suitable candidate for the job and on behalf of the Network of Rural Women Producers, Trinidad and Tobago we would like to extend our congratulations and vote of confidence in her executing her duties effectively and efficiently.