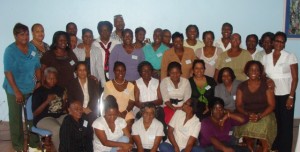 Training provided to have a multiplier effect on productivity and sustained economic growth, guided by rural women micro-entrepreneurs across the Caribbean.Thirty rural women micro-entrepreneurs from 12 countries across the Caribbean region have benefited from an important training exercise that will allow them to attain greater gender equality and further exploit business opportunities in an effort to increase production and productivity.  All towards achieving the long term Millenium Development Goal (MDG) of ending poverty and hunger in the Caribbean region.The five-day workshop, held in Saint Lucia from June 21-25, 2010, was facilitated by the Inter-American Institute for Cooperation on Agriculture (IICA), under a UNIFEM-funded project entitled “Capacity Building for the Caribbean Network of Rural Women Producers (CANROP)”.  Participants were members of the executive committees of national chapters of the CANROP from Antigua, The Bahamas, Barbados, Dominica, Grenada, Guyana, Jamaica, St. Kitts, St. Lucia, St. Vincent and the Grenadines, Suriname and Trinidad and Tobago.The women were exposed to an intensive and interactive Train the Trainer exercise in entrepreneurship, financial management, strategic planning, social skills and networking. The skills honed at the workshop will empower the women to effectively represent themselves in the ever-evolving business and social environments and enable them to deal more positively with change to meet global requirements. Those trained at the workshop are expected to maintain their role as leaders who will go back to their respective groups in the countries and transfer the knowledge and skills at the local levels.  The multiplier effect will broaden the knowledge and skill base in management, entrepreneurship and productivity among women in the Caribbean region.  This will also ensure the sustainability of the women’s network which is seen as a unique vehicle for engendering the kind of development needed within the private sector at that level in the Caribbean.Recognizing that women play a key role in the attainment of the MDGs especially as they relate to ending poverty and hunger and promoting gender equality and empowerment of women, IICA continues to provide the necessary support for the growth and development of the women’s network.  The Institute will continue to invest in the women through capacity building and knowledge transfer in various areas identified by the women as necessary for their further development and within a framework for capacity building in rural development.The CANROP was established under the guidance of IICA in 1999.  It is an umbrella organization which incorporates 12 national chapters, whose members are mainly rural women micro-entrepeneurs involved in a range of business activities from agricultural production to small-scale processing; craft and services.  The mission of the CANROP is to empower rural women to improve their socio-economic position and participation through demand driven training, cultural exchange, networking, product development and inter- and intra-regional trade.